What children think and feel about growing up poor

What children think and feel about growing up poor 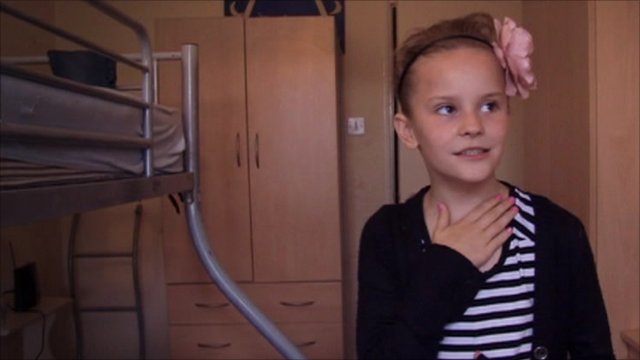 More than 3.5m children live below the poverty line in the UK, which has one of the worst child poverty rates in the industrialised world. Four youngsters explain what it is like growing up when a family has little money.

“You must be kind of bad to put people in houses like this,” says 10-year-old Paige. She is talking about her home, a high-rise flat in the Gorbals area of Glasgow.

“Me and my friends found needles in the bins when we were playing – it’s not very nice to see that at our age when you go out to play.”

Needles aside, Paige’s main problem is the inside of her flat, where damp covers most of the walls.

“They make the outside of the blocks look nice, but inside it’s terrible,” she says.

“It’s not our fault it’s a mess. You can’t put wallpaper and paint on it, because the damp will show through.”

The ceiling of one room fell in due to the damp on Christmas day, and Paige says day-to-day living is horrible.

“I can’t sleep on my top bunk because the mould goes along and it goes on my chest. It’s disgusting, we feel sick all the time.”

Recent figures show 47% of children with asthma are from the poorest 10% of families in the UK, and 85% of children living in damp houses suffer from breathing problems. 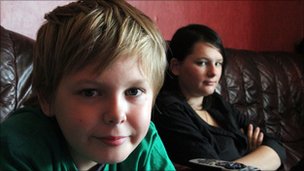 Sam and Kayleigh have lived with their father, since their mother walked out on Sam’s second birthday

This is the second home Paige and her mum and dad have lived in that has had damp, and she is desperately hoping her family will be re-housed somewhere else.

“It really annoys me because some people will bully you because your house isn’t all fancy like theirs. How would they feel if they were in a house like this? They wouldn’t really like it.”

Sam, who is 11, lives in Leicester with his father and older sister and knows all about bullying.

“They call me ‘ankle boy’ because I have ripped trousers that are too small for me,” he says.

“I get called ‘big girl’s blouse’. I have to re-use my sister’s shirts and then I get called a ‘girl’ which gets me psyched up and I just want to punch them, but then I’d get detention.”

His 16-year-old sister Kayleigh admits she is concerned about Sam being bullied.

My family can’t do nowt that other kids can do. They get to go out of Bradford and get adventures and learn more about this world”

“You have to be so worried about what you say. You tend to start merging into the background because you don’t want people to know what’s going on at home.”

She admits to worrying about money constantly and says poverty is a burden for children.

“Sometimes it does feel like you’ve got a big hefty secret and you need to keep it hidden. It puts you in that mindset that you’re lower than everyone else.”

One in six poor children have considered suicide and Kayleigh admits she did try and take her own life when she was younger.

“I was thinking things along the lines of ‘I’m not worthy enough to be here. Nobody wants me here, I’m better off dead’.”

Sam says he feels “angry and frustrated” that his dad cannot find any work and fears for the future as he has heard about further job cuts coming.

“They are raising the price of food and lowering the money. How are you supposed to get a job when jobs are going away?”

One in five low income families report skipping meals, and children living with single parent families are twice as likely to go without.

That is something eight-year-old Courtney, who lives in Bradford, experiences every week.

“For tea we have a big version of a sausage roll.

“I go without dinner when I’m at home but when I’m at school I get free dinners,” she says.

Courtney lives with her mother and three sisters. Come the school holidays paying for food for the girls is a struggle without free school meals. 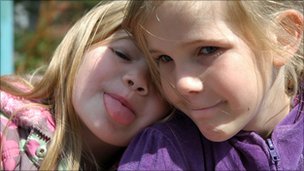 Courtney (right, with sister Chantelle) admits she is scared of growing up

Summer holidays also mean they have time on their hands, as they cannot afford activities.

She and her sisters end up playing in derelict buildings and inside a ripped double bed frame in their flat.

Courtney says she feels “sick” at the thought of the long summer holidays with no money to do anything.

“I get jealous when other people go on holiday and we can’t afford it,” she admits.

“My family can’t do nowt that other kids can do. They get to go out of Bradford and get adventures and learn more about this world.”

Paige, though, has some good news. Her family have a new home, a house, a half-an-hour’s drive away from their damp high-rise flat.

Looking in wonder at her new bedroom she admits: “It’s amazing, I can’t believe it. It’s so weird you look up there and there’s no dampness.

“I think my life will be much better. Nobody can talk about me and say ‘She’s stinking and smells of damp’ any more.

“Sometimes it’s hard to survive with what we’ve got. If you get holes in your shoes it’s hard for your family to get you new shoes.

“I don’t know how my mum and dad do it, but they do and I think that’s very good.”

The UK Government should be so ashamed with regards to how these children told in their own words,how their parents struggle to make ends meet, on some occasions the children go without the bare essentials that we all take for granted.

One young boy from Leicester describes how is Auntie payed for is only ever hair cut at the barbers, he was forced to go to school in his sisters blouse, his trousers were to small for him, the poor lad was bullied at school, his Father struggled to bring his sister of 16 years of age up, and himself, after their mother left them several years ago.

Two families in Glasgow.struggle in high rise damp flats in Glasgow. the flats were absolutely disgraceful, wall paper pealing of the walls, the child clothes were going moldy.

Some third world Countries have better housing for their citizens, including Egypt where i visit at least five times a year.

While David Cameron and Nick Clegg send many millions of pounds of aid abroad, our children and elderly are starving.

GOVERNMENT CHILD ABUSE BY NEGLECTING CHILDREN OF THE FUTURE,BY GETTING THEIR PRIORITIES WRONG BY BAILING OTHER COUNTRIES OUT WHEN OUR CHILDREN ARE STARVING-DISGRACEFUL.